“A beautiful blend of sound … highly engaging” The Times 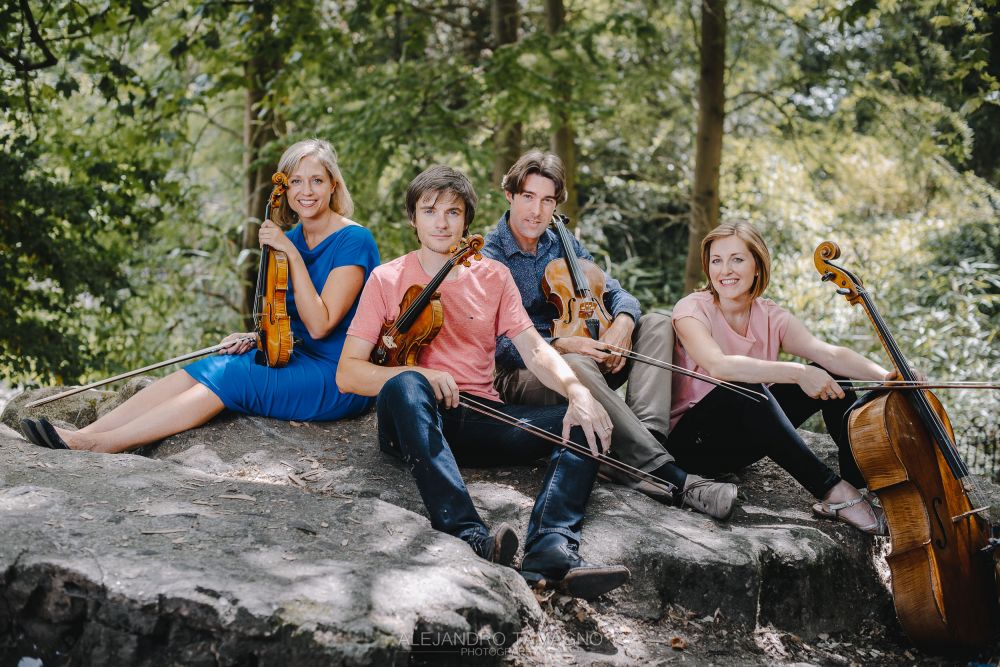 The Sacconis’ prolific recording career covers a broad swathe of repertoire from Haydn to present day. Their latest album featuring world premiere recordings of works by Roxanna Panufnik is just released on Signum Classics. Releases of recent years include premiere recordings of works by Jonathan Dove, Graham Fitkin and John McCabe. In Damascus, their CD of music by Jonathan Dove, hit the Classical Top Ten, and was chosen as one of Gramophone Magazine’s Recordings of the Year.

Last season saw the quartet make their debut in Russia with pianist Peter Donohoe. They continued their performances of Dove’s In Damascus with Mark Padmore and Robin Tritschler, and gave several performances of their inimitable Beethoven in the Dark. Firm advocates of new music, the Sacconi recently premiered their latest commission from Graham Fitkin, Loosening for saxophone and quartet. Last season they gave world premieres by Judith Bingham, Roxanna Panufnik and John Woolrich, andtoured with Helen Grime’s string quartet. Future commissions and premieres include quartets from Jonathan Dove and Judith Bingham and a string quintet from Nicola LeFanu.

The Sacconi Quartet is Quartet in Residence for the town of Folkestone and its surrounding areas, enabling creative collaborations with local artists and projects, and an embedded outreach programme. The Sacconi Chamber Music Festival in Folkestone is firmly established among the UK’s major chamber music festivals and attracts audiences from far and near for its vibrant atmosphere and dynamic programming.

In 2015 the quartet launched HEARTFELT, their most innovative project to date. A radical re- interpretation of Beethoven’s op.132 quartet, HEARTFELT pushed the boundaries of chamber music through combining sound, light and touch, for a truly unique performance in which audience members connected with each performer’s heartbeat through holding robotic ‘hearts’.

In March, the quartet released an exclusive film of Jonathan Dove’s ‘Out of Time’ on Amazon with all proceeds going to Hands Up Foundation, a young and innovative charity that delivers aid directly and effectively to Syrians in need. The Quartet is indebted to the Royal Society of Musicians and Ellen Solomon for the use of their instruments.

The Sacconi Quartet celebrate their 20th Anniversary in the 2021-22 season, performing their latest commission from Jonathan Dove On the Streets and In the Sky alongside their favourite works from across their twenty years together. They will also continue to tour with Beethoven in the Dark, their immersive performance of Beethoven’s op.131 quartet entirely from memory, in almost complete darkness. “This stunner from the Sacconi Quartet was all about letting the music speak. Eyes open or closed, it was all you got.” Classic FM