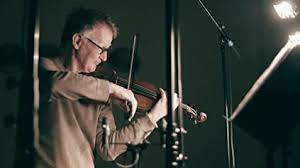 Thomas Bowes is one of the UK’s most versatile and accomplished violinists – as a soloist, chamber musician, concertmaster and artistic director.

His concerto work in the UK, Germany and the USA has included performances of the Elgar, Walton, Britten and Szymanowski concertos. At the invitation of the late Lady Walton, Tom spent three weeks on Ischia studying the history and score of the Walton concerto. His subsequent critically acclaimed recording of the work (along with the Barber concerto) reveals a special connection to Walton’s music.

Tom undertook an extensive ‘Bach Pilgrimage’ in 2013, giving fifty concerts of the unaccompanied Sonatas and Partitas of JS Bach in churches across mainland Britain and raising over £20,000 for various charities. His recording of the works is due for release in early summer 2018 when he will again be making a Bach Pilgrimage across Britain. Further Pilgrimages are planned for every year.

Tom’s partnership with his wife, the composer and pianist Eleanor Alberga, has played a significant role throughout his career. As the duo “Double Exposure” they toured extensively across the USA, made a ground-breaking trip to China in 1997 and gave regular performances and broadcasts in the UK. The Duo established a reputation for adventurous programming and regularly performed commissions and world premieres of American and British composers.

As an enthusiastic champion of the music of Eleanor Alberga, Tom gave the world premiere of her first Violin Concerto with the Scottish Chamber Orchestra conducted by Joseph Swensen. A second Alberga concerto is in the midst of composition and a premiere is planned for the 2019/20 season.

Chamber music has been a major part of Tom’s artistic life – he was the founding leader of the Maggini Quartet – and between 2003 and 2016 he was the Artistic Director of the Langvad Chamber Music Jamboree in northern Denmark. More recently, with Eleanor Alberga, he founded the music festival Arcadia in north Herefordshire, England. Central to the ethos of both festivals is to bring fresh, authentic and vibrant music making to local communities and their audiences.

Equally at home in the commercial recording studio, Tom is in great demand as soloist and concertmaster and works closely with many of today’s most eminent film composers. Amongst numerous film credits are such hit-movies as the Bond films “Spectre” and “Skyfall”, The Hunger Games trilogy, “The King’s Speech” and “The Da Vinci Code”. Tom is privileged to own and play a violin by one of the great Cremonese makers – a splendid 1659 Nicolo Amati.