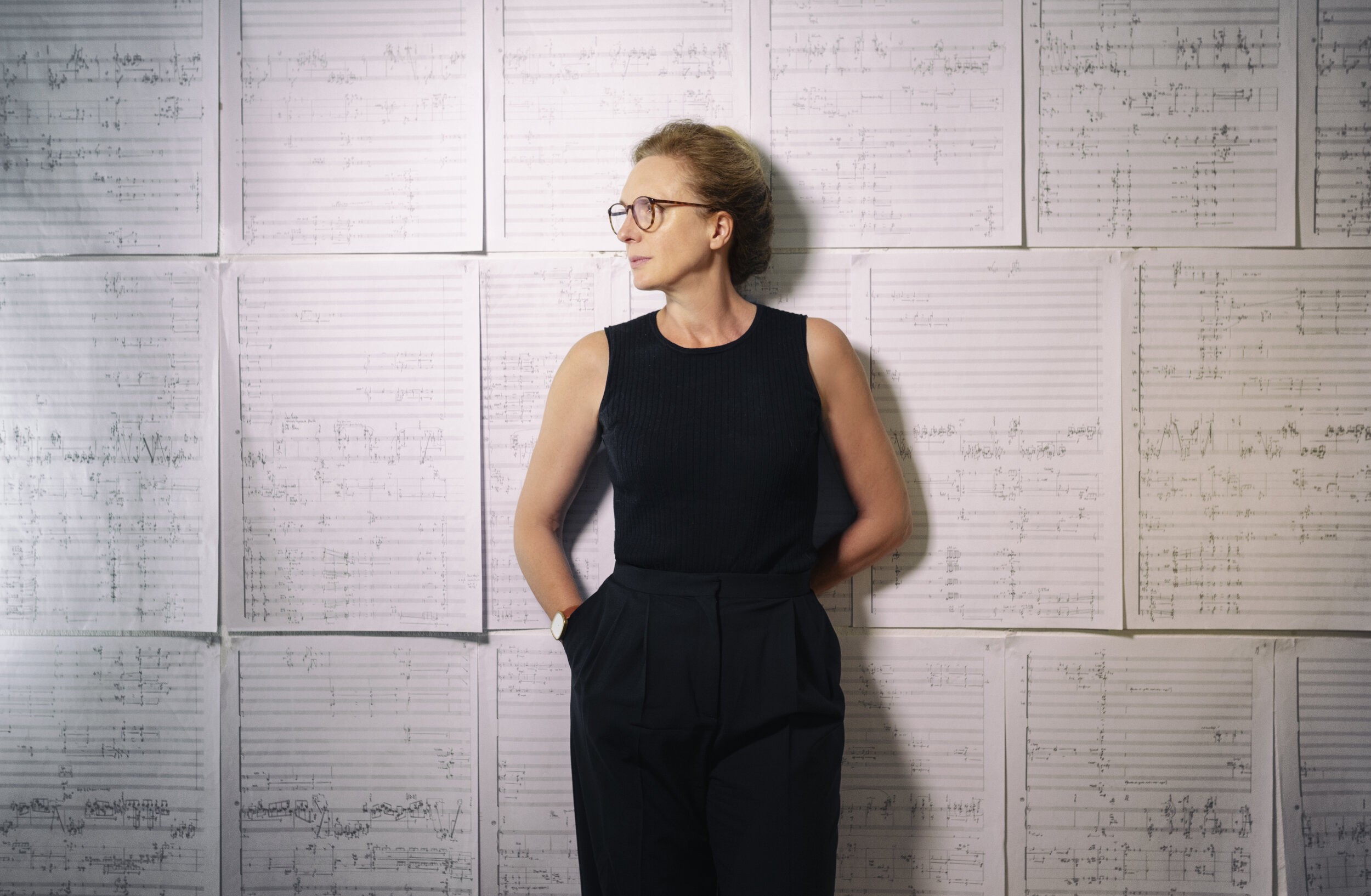 With her distinctive and intensely striking sonic language, Berlin-based British composer Rebecca Saunders (b.1967) is a leading international representative of her generation. Born in London, she studied composition with Nigel Osborne in Edinburgh and Wolfgang Rihm in Karlsruhe.

Saunders pursues an intense interest in the sculptural and spatial properties of organised sound. chroma I – XX (2003-2017), Stasis and Stasis Kollektiv (2011/16) are expanding spatial collages of up to twenty-five chamber groups and sound sources set in radically different architectural spaces. insideout, a 90-minute collage for a choreographed installation, created in collaboration with Sasha Waltz, was her first work for the stage and received over 100 international performances. Most recently in 2017, Yes, an expansive 80-minute spatial installation composition, was written for Musikfabrik, Donatienne Michel-Dansac and Enno Poppe for the extraordinary architectural spaces of the Berlin Philharmonie and the St. Eustache Cathedral in Paris.

Since 2013, Saunders has written a series of solos and duos for performers with whom she has collaborated closely over many years, including Bite (2016) for bass flute, Aether (2016) for bass clarinet duo, dust (2017/18) for percussion, O (2017) for soprano, hauch (2018) for violin, and Flesh (2017/18) for accordion. She has simultaneously pursued her keen interest in works in the concertante form, writing a double percussion concerto Void (2014), a trumpet concerto Alba (2015), and both Skin (2016) and Yes (2017) for soprano and large ensemble. Alba and Void marked the close of a triptych of works which also includes the violin concerto Still (2011). In 2016, her extended violin concerto Still (2011/16) was performed in collaboration with the choreographer Antonio Rúz, the dancers of Sasha Waltz & Guests, Carolin Widmann, the Junge Deutsche Philharmonie and Sylvain Cambreling. In 2018 her double bass concerto Fury II was choreographed by Emanuel Gat in collaboration with Ensemble Modern as part of the Story Water project.

Her compositions have been recognised with numerous international prestigious awards, including the 2019 Ernst von Siemens Music Prize (following one of the Young Composers’ Prizes of the Ernst von Siemens Music Foundation in 1996), the ARD und BMW musicaviva Prize, the Paul Hindemith Prize, four Royal Philharmonic Society Awards (for Stirrings Still in 2008, Fletch in 2013, Skin in 2017, and Yes in 2019), four BASCA British Composer Awards (for Solitude in 2013, Alba in 2016, Skin in 2017 and Unbreathed in 2018), and the GEMA Music Prize for Instrumental Music. In 2015, Saunders received the Hans und Gertrud Zender Foundation Prize and the prestigious Mauricio Kagel Music Preis. Accordionist Teo Anzellotti’s CD, …of waters making moan, which included Saunders’ eponymous work, won the German Record Critics’ Award of the Year for 2016.

Saunders is in great demand as a composition tutor and teaches regularly at, amongst others, the Darmstadt Summer Courses and at the Impuls Academy in Graz. She was professor of composition at the Hannover University of Music, Theatre and Media. She lives in Berlin and is a member of the Berlin Academy of Arts and the Sachsen Academy of Arts in Dresden.

Saunders’ music has been published by Edition Peters since 1997.