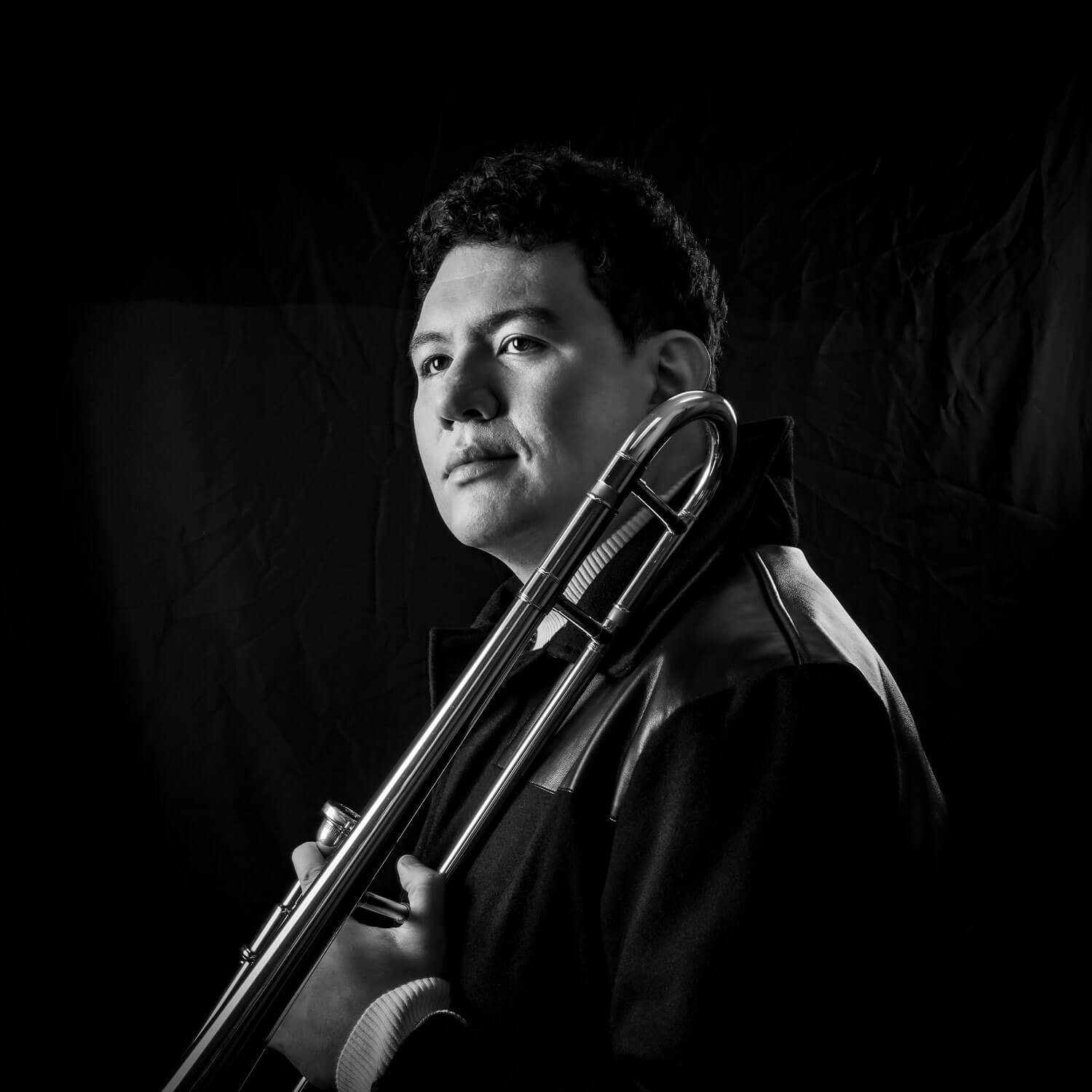 Callum Au is a professional trombonist, composer, orchestrator, and arranger. Based in London, Callum has worked with some of the UK’s top big bands and orchestras, and has fast made a name for himself as one of the UK’s finest young musicians.

Callum was privileged to be taught in his youth by veteran trumpet player Terry Reaney, pianist Brian Harrison, and top UK jazz trombonist Mark Nightingale. He was a member of Bill Ashton’s National Youth Jazz Orchestra from 2005 – 2010, during which time he played lead trombone and was one of the band’s principal arrangers.

Callum works as a trombonist and principal arranger at Ronnie Scott’s Jazz Club, alongside illustrious bandleader and clarinettist Pete Long. In this post, he has worked with many of the world’s top professional jazz and commercial artists, including Joss Stone, Seth MacFarlane, Jason Robert Brown, Liane Carroll, Tim Minchin, Peter Erskine, and two thirds of the Spice Girls!

Callum is active as a freelance trombonist and has worked with many of the top ensembles in the UK, including the John Wilson Orchestra, Echoes of Ellington, and in the pit of several West End shows. In 2014, he performed at the BBC Proms Battle of the Big Bands in the James Pearson Big Band, where he also contributed several of the arrangements.

As a freelance composer and arranger, Callum has written or arranged music for a huge variety of ensembles and artists, including the BBC Big Band, Jamie Cullum, the RTE Concert Orchestra, Clare Teal, and the Swingle Singers. Callum is in high demand for his orchestration skills, and has arranged music for several major touring shows including ‘Lorna Luft: The Songbook of Judy Garland’, ‘The UK Salutes Frank’, and ‘From Rags to Ritzes: the Irving Berlin Story’. Callum has also arranged and orchestrated a variety of TV, film and library music including the film ‘A Royal Night Out’ starring Emily Watson & Rupert Everett.

In 2014, Callum was selected as one of seven up-and-coming arrangers from around the world to participate in the Metropole Orchestra Arrangers’ Workshop, where he worked with composer/ conductor Vince Mendoza, and vocalist Gregory Porter. Since then, Callum has been invited to work with the Latvian Radio Big Band, in a project arranging the music of J.S. Bach for big band, featuring accordion soloist Ksenija Sidorova.

Callum is the orchestral manager and musical director of the Callum Au Big Band, which features some of the finest jazz musicians in the UK. The band released its debut album ‘Something’s Coming’ in 2012, which featured as its centrepiece a suite of music based on the musical ‘West Side Story’. The band has also worked on an arrangement of George Gershwin’s masterpiece ‘Rhapsody in Blue’, which premiered at Ronnie Scott’s in 2014 and featured pianist James Pearson. Callum also performs with his jazz quintet, co-led by baritone saxophonist Richard Shepherd, and inspired by the Brookmeyer/Mulligan group.

Callum is the trombonist and principal arranger for the ‘Close To You’ ensemble, a collaboration between the acclaimed Tippett Quartet and the James Pearson Quintet. A unique chamber ensemble featuring both jazz and classical elements, this hand-picked group explores the canon of the Great American Songbook, working with top vocalists Matthew Ford, Claire Martin, and Anna-Jane Casey.

In Autumn 2014, Callum was appointed as the guest MD of the Leeds College of Music Contemporary Jazz Orchestra, where he directed the band through his West Side Story Suite for a term. Callum has also directed workshops with the National Youth Jazz Orchestra, and his arrangements are played in many schools and colleges around the world.